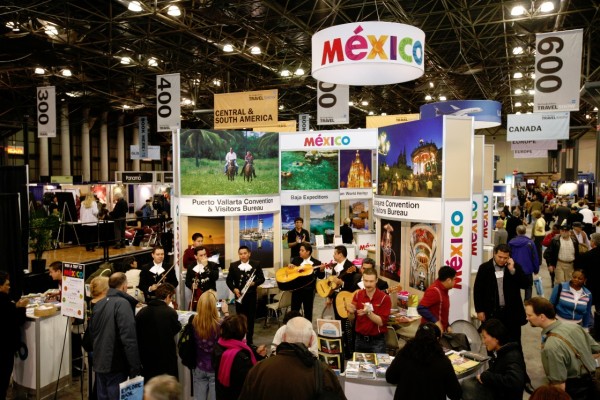 Does this booth at a recent travel show look familiar to you? I saw this picture recently and it started me thinking.

Travel shows are a common way for destinations to market themselves to travelers. What could be better than a room full of travelers wondering where they should go next? That is certainly an advantage the travel show has over mainstream media. You are dealing with a focused audience. But how much, I wonder, did this destination pay for that attention? I did some calculations.

The price for a 10 x 10 booth at the New York Times travel show in New York City is $3600 and the price for a 10 x 10 booth at the LA times travel show is $2850. The booth in the picture is roughly twice the size so let’s assume that it was twice that cost. Then we need to add in the cost of flying in people to man the booth, hotel accommodations, salaries or hourly wages, and in this case the cost of a mariachi band. That probably puts the price of this booth easily in the realm of $9,000 dollars.

So how much attention do those dollars by? Looking at our photo I count 12 people at the time of this photo who are paying attention to what’s going on in the space and don’t look like they work there. Let’s assume this captured a typical moment of a typical day at the travel show. If the show is three days long for 8 hours a day and if 12 people on average are at the booth than the total attention time for this booth is 12 × 3 x 8 hours or 288 hours of attention (HOA).

Hours of attention (HOA) may not be a unit that you use on a regular basis but I propose that it has some value. Common sense would say that a person engaged in conversation at the booth for 10 minutes is more valuable than a person engaged for one minute. Hours of attention as a metric would assume that 10 people engaged for one minute is roughly the equivalent of one person engaged 10 minutes. While not scientific, it does provide an interesting framework for comparing a variety of disparate media.

In the case of the travel booth I am estimating that the destination paid around $31 for every hour of attention. 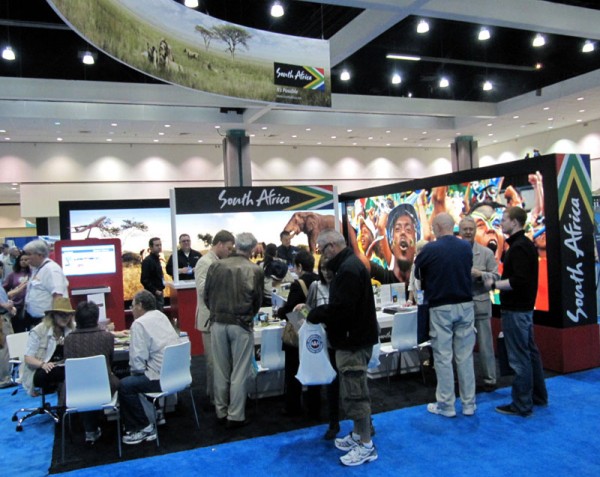 So what are alternative ways of spending that money?

Let’s say you have the money to buy a full page ad in Travel + Leisure instead. Again you have a targeted audience of travelers which is good. So how long does the average reader spend on a typical full page ad?

But isn’t that just another way of saying that the average reader is not spending that much time on any specific ad. I am going to estimate that a typical full page ad is going to get 15 seconds of attention, although frankly for me I think that is generous. The subscription of the magazine is 950,000 readers so that would be 3,958 hours of attention using those assumptions. According to their rate card a 4-color ad full page ad would start at $124,350 (without volume discounts). So you would be paying $31 per hour of attention. Surprisingly the same amount but for a much more shallow engagement with a much larger audience.

If you had the money for a Super Bowl ad last year you could have gotten a 30 second ad for $3.8M to reach an audience of 111 million. From the ad length, if everyone watched the ad that would be 925,000 hours of attention if everyone was glued to their set. According to Scott Tissue, during the halftime of the SuperBowl “an estimated 90 million people use their facilities” so we know that not everyone watched every second of every ad. But let’s optimistically assume half the people watched the ad. That is still 462,500 hours of attention. But, how many of those are travelers? Around 35% of Americans have a passport, that’s still 231,250 hours of attention. But if you are an overseas destination then you should know that only 28.5 million Americans traveled overseas in 2012 according to the Office of Travel and Tourism Industries. So instead of 35% that is 9.1% (some studies put that number as low as 3.5%) so that would be 42,112 hours of effective attention or $90 per hour of attention.

What is the value of a blog post? Let’s say a popular blogger writes an article on your destination. If that blogger can get 1000 people to read that article depending on the length of the article time on site per page like me in the 1 to 2 minutes range (you can determine how long people spend reading a particular page of your website by looking at Google analytics on average). If we assume an average age time of a minute and a half then every 40 page views would provide one hour of attention. One thousand page views would be the equipment of 25 hours of attention. If we pay at the same rate for that article per hour of attention that we paid for the trade show that would mean this article should cost $775.

That is ignoring of course that the blog post will also get more page views in the future and will provide search engine optimization value so the blog post should have more long term value than a trade show, TV ad or magazine ad.

If you think that seems over priced wait until you hear this. I do a popular podcast which gets easily 8,000 downloads of a half hour show. So that is roughly 4,000 hours of attention. So having an episode of the Amateur Traveler about your destination at the rate again that was paid for the trade show means that the podcast would have a cost of $124,000 per episode which is coincidentally the same cost as the Travel + Leisure full page ad for the same hours of attention. I have seriously got to raise my rates.

Are these numbers estimates? Yes, but I think they are reasonable.

Is hours of attention the only thing that you should look at? No. But next time you are considering where to put your advertising or marketing money, do some calculation. How much attention are you buying for your dollars?